© Lady Bay Art Glass. Reproduction in whole or part is not permitted.

Whilst we understand that it is possible to copy anything on this site we ask that you only do so for your own immediate viewing and that if you want to use parts of this site for other purposes you should ask our permission first.

Lady Bay Art Glass specialises in the making and of restoring leaded lights. In ancient times glass blowers were limited in the size of pieces that they could reliably make so a method of joining them evolved using lead cames (or calmes), an H-section strip of lead into which two pieces of glass would fit. This method is still used today, with minor improvements, as a means for creating decorative panels.


Leaded lights became very popular in secular buildings in the Victorian era. Victorian style required that decoration be applied to almost everything and so windows and doors were subject to the same treatment, using coloured and stained glass to adorn the panels.

In the Edwardian era came a simpler, plainer , less fussy design philosophy, however glass was still used as decoration but with different designs to suit the new era. Design evolved rapidly after WW1and the styles of the 1920’s and 30’s are easily recognisable. After WW2 fashions started to change as soon as building started again and whilst some houses were built to 1930’s plans including the door and window leaded lights these became very rare by the mid 50’s.

From the 1960’s leaded lights along with many other period features became decidedly unfashionable and consequently many original examples, when they needed repairing, were scrapped. Indeed in many instances the door and window frames were scrapped with them and often horrific replacements installed in their place. This is still going on today promoted by the replacement window industry. 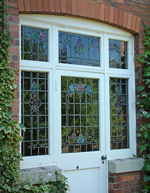 Since the 1980’s there has been a revival in the appreciation of period features. Our experiences in trying to find suitable designs for our French Doors way back in 1986 led us to the realisation that there was a complete absence of specialists in the stained glass field that were able to offer designs suited for period property. We were aware that many pattern books existed but found all of them to be lacking in relevance to properties in our area. So we started, in 1992, photographing every existing leaded light in the area in order to construct a record of design styles for local property. This archive became the basis for the snappily titled Dover Publications book "390 Traditional Stained Glass Designs" (more details in the Design section).

We now specialise entirely in commissions and restorations for period domestic properties, choosing to pass enquiries for ecclesiastical or modern 'artistic' commissions to other stained glass artists. This website can't possibly show the full extent of the work we have done, with hundreds of completed commissions in and around Nottingham, not to mention the hundreds more restorations, but will serve as an introductory taster to give an idea as to our skills and accomplishments. The site will, I hope, show what is possible, why design is so important, why we involve the customer so much and why glass colours and textures are central to the period look.